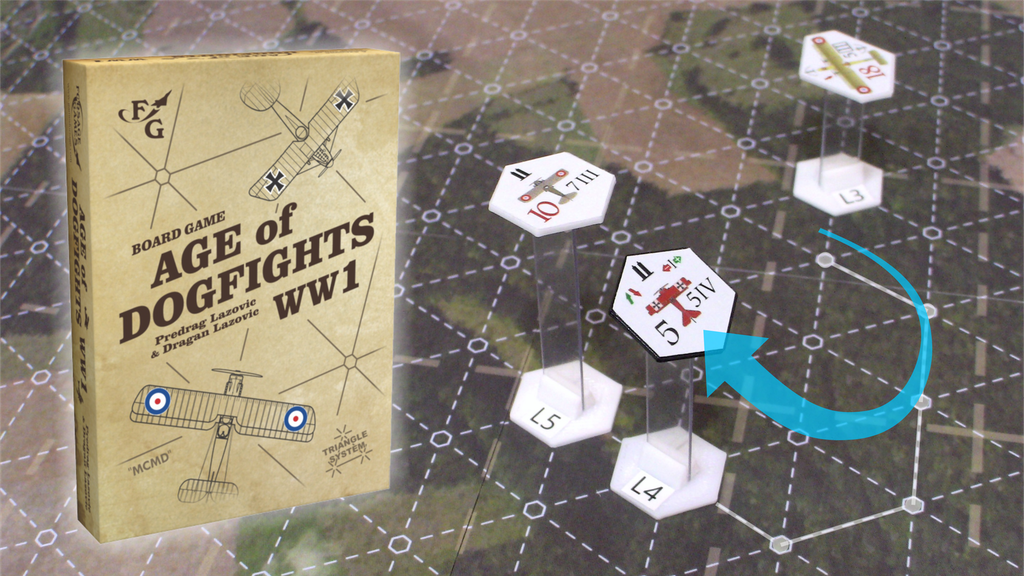 Latest Updates from Our Project:

Pre-order campaign on the BackerKit platform has been going on for several days now. Most bakers have already filled out the survey. We are glad that many of you have ordered one or more expansions and some of the add-ons.

Since the board got the other side (water surface) as a stretch goal already during the Kickstarter campaign, it is imposed on us as a task to write at least one scenario in which torpedo bombers will play the main role.

At the request of some bakers, we also promised that individual planes of some types would be differently colored. We have started working on it and you can see several drawings already done.

The orders in the pledge manager will be locked on August 15. Until then, all backers should fill out the surveys ( https://age-of-dogfights-ww1.backerkit.com/ ). We have already started preparations for production. Some more elements will be improved, follow our updates.

The pledge manager has started - the surveys are sent and the pre-order store is open. It will last until August 15th, when the orders will be locked (backers should choose their add-ons by then).

The basic game, with stretch goals, contains as many as 40 types of aircraft (78 pieces) from the three most important aviation from WW1.

During the campaign, we asked the backers if they would like an add-on (expansion) -  "Additional Aircraft Types" that would contain another 40 different types of aircraft (80 pieces) which would cover almost all aircraft that participated in the war. The final choice of aircraft types is made based on your votes.

Some backers have suggested that we make an add-on that would contain only the most important types of aircraft, but in slightly larger numbers, so that some historical battles could be simulated. The name of this expansion is the "Important Aircraft Supplement" and it contains 18 types of aircraft (54 pieces).

In addition, there is a mini expansion - a set of 6 types of aircraft (12 pieces) used by the Ottoman Empire.

So the main game and expansions contain a really large number of aircraft types from the WW1 period. The development of aviation continued even after the end of the war, but not at such a fast pace. During the twenties of the last century, new types of planes got more and more powerful engines, so their maximum speeds and ceilings became higher. Beside that, almost all other characteristics were at the level of aircraft that participated in the war (It was not until the 1930s that airplanes received significant changes in construction: single-winged aircraft dominated, cockpits were closed, the landing gear was retractable, etc., which is why their characteristics were drastically improved). Therefore, aircraft created during the twenties are very similar in characteristics to WW1 participating airplanes. That's why we decided to offer "AoD: 1920s" (expansion for "AoD:WW1"). The list of aircraft that are in this expansion can be found in description of this add-on in BackerKit:

We have selected aircraft from 11 countries that we believe were the most significant in that period. The expansion contains 41 types of aircraft (82 pieces). Germany was not allowed to have an air force, but its factories produced airplanes for other countries. We chose two types of aircraft that were made for the USSR. In this expansion, three types of aircraft from the Dutch Fokker factory, which produced aircraft for Germany during WW1, now have Dutch markings. USA, which bought almost all fighter planes from Europe during WW1, now has become one of the most important aircraft manufacturers. It is interesting that Soviet planes were among the best from that period. Czechoslovakia and Japan also had great airplanes... In general, the choice of planes is large and we think that gamers will be very interested in fighting battles in various combinations. There were no wars between big countries then, so players will have to decide which planes will participate on which side. You can, of course, combine airplanes from the basic game (and other expansions) with airplanes from the '20s. In addition to describing the characteristics of the aircraft, the brochure will also contain a couple of scenarios.

The backers mostly chose planes that were used in large numbers. Only some types are introduced because of specificity, not because of a significant role in the war. We did not decide to pick 20 planes from the countries of Central Powers and the Entente Bloc, but according to the total number of votes. There are also 1 or 2 planes from other countries, beside France, Germany and Great Britain.

This was the kind of campaign we could only wish for. We had a good collaboration with backers who helped us make this game in serial edition even better. Thank you for your cooperation. Follow our updates, we will keep you informed about the project. In two to three weeks, the campaign will start on BackerKit, where add-ons will be available for selection.

The twelfth stretch goal is scored - the Sopwith Baby floatplane.

This was the last stretch goal during the Kickstarter campaign, but there will be 3 bonus stretch goals after the campaign, during the pre-order period in BackerKit. These will be torpedo bombers. Since the board will have one side with the sea surface, the introduction of torpedo bombers in the basic game will enable games to be played according to some specific scenarios. As a result, some of the planes we said would be part of the Additional Aircraft Types add-on will become stretch goals.

The first bonus stretch goal is set to a larger interval, because postage has yet to be collected (which is estimated at around $ 20 000).

The Expansion brochure has been written, is now being translated into English and pictures are being drawn. This is the first version, some rules have yet to be tested and the final layout of the charts determined. Only the first two pages (out of 8) are shown in this update (the pages are half the size of the pages in the basic game manual). Below is just an announcement and description of some scenarios that will be included in the brochure or on separate sheets.

The rules of this game in combination with a two-sided board (land and sea), a large number of different types of aircraft, AA zones, barrage and observation balloons, and airships allow you to design a variety of symmetrical or asymmetrical scenarios. By scenario, we mean a description of the initial positions of pieces, their numbers, as well as the tasks to be performed. Simply put, each player has airplanes at their disposal and should devise a way to complete the task and defeat the opponent.

Here are descriptions of some of the scenarios, which we will write in more detail before the brochure is published:

1. Attack of the Austro-Hungarian and German mixed squadrons on Italian positions. The task is to bomb two zones (ammunition depots) right next to the front line. 5 bombers and 4 fighters take part in the attack. The Italians are defending themselves with 6 fighters, and they have 6 connected barrage balloons and AA zones at their disposal.

2. Serbian-French squadron (4 light bombers and 4 fighters) returns from the task with low ammunition (each plane has only 2 or 3 bursts left). Six Bulgarian fighters are waiting in an ambush.

3. Two British airships have the task of patrolling between given coordinates (zones). In one part of the route, protection is provided by fighters who took off from land airports (3), and in the other part of the route, they are accompanied by floatplane fighters (2). Two groups of German fighters (7 in total) are trying to take airships down.

4. A group of German and Turkish (or Bulgarian) torpedo and classic bombers escorted by fighters attack French ships. French classic fighters and floatplane fighters are intercepting them.

5. A British airship and two American seaplanes have the task of bombing Austro-Hungarian ships. They are followed by just two American fighters, and they are intercepted by a group of 6 fighters and flying boat fighters.

6. A complete Russian squadron (12 planes) tries to break deep into the enemy background. They are intercepted by just 4 German fighters.

These are all asymmetric scenarios in which players have different tasks (attack or defense). The next 4 scenarios are symmetrical - players have the same tasks.

8. A complete Serbian squadron (8 planes) against a complete Bulgarian one (8). The symmetrical task is to first bomb, and then photograph the given zones near the front line.

9. Great battle: two joined boards are used. On one side, French-Italian planes (24), on the other German-Austro-Hungarian (24). Each side has AA zones, 6 barrage, and 3 observation balloons. There are also zones that need to be bombed - photographed. The battle is all-encompassing and everything is calculated and scored: shooting down planes, balloons and bombing (photographing) given zones.

10. Numerous symmetrical variants 3 vs 3 or 4 vs 4 where a small number of fighters fight for supremacy, without any special task.


We'll publish another update with the final list of aircraft in the Additional Aircraft Types add-on.